Following a busy summer of World Cup football and a thankfully short preseason, the Bundesliga makes its return, and the 2018-19 campaign looks set to deliver once more. An eagerly anticipated matchday 1 saw champions Bayern Munich open with an incident-packed win over Hoffenheim, while Vizemeister Schalke slumped to an opening loss.

There was a pulsating Rheinderby, as well as a top clash between Borussia Dortmund and RB Leipzig, who shared five goals, to round off the weekend.

So just who were the winners and losers of the opening weekend?

Having lost three times to Rhein rivals Bayer Leverkusen last year, the season opener at the Borussia Park was always going to be a tough ask for the Foals, but in the end they emerged with a hugely deserved win.

Dieter Hecking’s side weathered a good start from their visitors before moving up a gear or two in the second half. Thorgan Hazard’s missed penalty was atoned for by Jonas Hoffmann, who dispatched a second spot-kick giving him his first-ever goal for the club.

Soon after, an incisive and breath-taking interchange of passing between Raffael and Fabian Johnson saw Gladbach double their lead. Yann Sommer kept Leverkusen out at the other end, while there were impressive debuts for both Florian Neuhaus and Louis Jordan Beyer.

All in all, a great start to the season by Mönchengladbach and, with the likes of Michael Cuissance, Dennis Zakaria, Christoph Kramer, and new signing Alassane Plea to come, the early signs are looking positive at the Borussia Park. 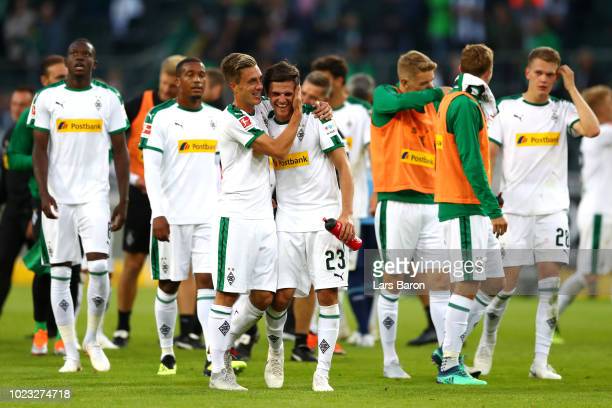 The story of Hendrik Weydandt seems to have been lifted from a work of fiction, but rest assured it is very much a reality. Four years ago the striker was plying his trade in the Kreisliga for TSV Groß Munzel before his goals led to him jumping three tiers to 1. FC Germania Egestorf/Langreder in the Oberliga Niedersachsen.

The goals flowed over the next couple of seasons and when he scored against Hannover II in the Regionalliga, he earned a move to the Niedersachsen side. Eight goals in preseason saw him called up for the DFB Pokal clash against Karlsruhe. Brought on as an 82nd minute substitute for Niclas Füllkrug, he scored with his first two shots. Fairy tale stuff.

His third shot in professional football? Oh that came on Saturday after coming on for his Bundesliga debut at the Weser Stadion with 15 minutes left. That touch saw him latch onto Ihlas Bebou’s through-ball before poking the ball past Jiri Pavlenka for the game’s opening goal. The Bundesliga’s very own Jamie Vardy has arrived.

If you cast your mind back to matchday one of last season, you might remember Nicolai Müller scoring on the opening day for Hamburg. What you also might recall, is his abysmal goal celebration with the corner flag, which led to him rupturing the cruciate ligament in his knee and missing the next seven months!

Fast-forward 12 months and Müller was once again am opening day scorer, this time on his debut for new club Eintracht Frankfurt. His celebration this time was a little more conservative as he settled for running to the bench to raise a shirt in support of the injured Timothy Chandler.

Optimism is not a word that’s been used in connection with VfL Wolfsburg over the past few seasons, but could that be about to change? Saturday’s display against last season’s runners-up Schalke has certainly given the long-suffering fans at the Volkswagen Arena something to think about as they ran out deserved 2-1 winners.

An energetic and confident display saw them get the better of the Königsblauen for large stretches of the game, and they showed great resolve to come back from Nabil Bentaleb’s 85th minute penalty equaliser. Daniel Ginczek’s injury time winner, you have to say was deserved on the balance of play, and for the first time in a while die Wölfe find themselves not in the bottom three.

‘Vorsprung durch Labbadia’? (Let’s not get too carried away).

There were plenty of players making their debuts for their clubs on matchday one, but there was only one player making his debut for the fourth time! On the 28th August 1999 an unknown Peruvian made his first debut for Werder Bremen coming on as a substitute against Hertha Berlin.

The favourite son has returned to the Weser Stadion three times now to make his second, third, and now fourth ‘debut’ for the Grün-Weißen. Aged 39- the veteran striker got a rousing reception on Saturday when he came on the replace Florian Kainz. 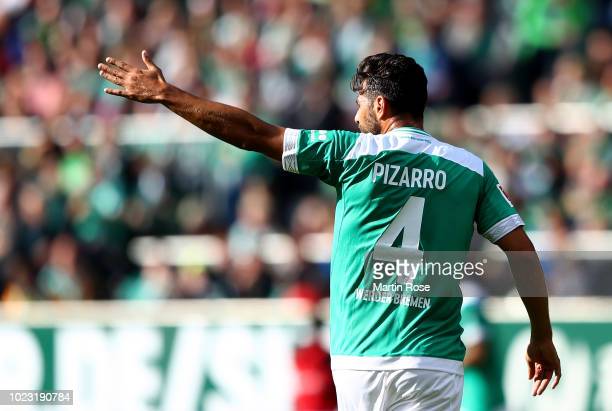 31 seconds gone and it looked like Lucien Favre’s bow as Borussia Dortmund coach was going to go a bit Peter Bosz (German slang for tits up). Hit by a blitz start by RB Leipzig, Jean-Kevin Augustin’s goal took everyone inside the Signal Iduna by complete surprise.

However, the following 89 minutes and 29 seconds saw a rampant response from the Schwarzgelben. Goals from Mahmoud Dahoud, debutant Alex Witsel, an own goal from Marcel Sabitzer, and a double from Marco Reus clinched a 4-1 opening victory and top spot in the nascent Bundesliga table.

You have to feel for poor Kingsley Coman after his start to the new season lasted all of 42 minutes. Having made a highly impressive start against Hoffenheim tormenting Nico Schulz and forcing a superb save from Oliver Baumann, he was forced off just before half-time with a serious injury.

Having bamboozled Schulz once again, the TSG man clumsily brought down the Bayern winger and at once you could tell something was up. Forced off, it was later confirmed that the 22-year-old had suffered a ruptured syndesmosis ligament just above the left ankle (the very same injury he suffered last year, keeping him out of action for about three months.

It is thought he could be out for up to two months. A fine start for Bayern result-wise, but with a black cloud hanging over it in the form of Coman’s injury.

Last season’s Vizemeister started the new season with a surprise loss to a Wolfsburg side that have a permanent fixture at the bottom of the table in recent seasons. A few pundits have predicted a struggle for the Königsblauen this season and on the basis of matchday 1, they may have a point.

They went behind to a first half header from John Anthony Brooks, and then had defender Nemanja Nastasic sent-off for a studs-up challenge on Wout Weghorst. Nabil Bentaleb did equalise from the penalty spot in the 86th minute, only for substitute Daniel Ginczek to fire in a 94th minute winner to stun Domenico Tedesco’s side. 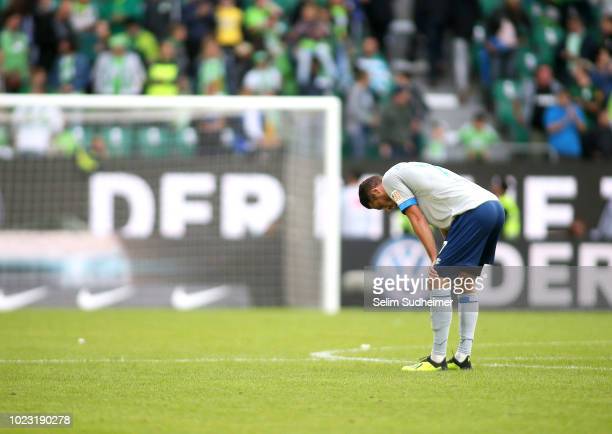 Kingsley Coman lasted just 42 minutes, but spare a thought for poor Christian Streich, who didn’t even make it to Freiburg’s opening fixture against Eintracht Frankfurt at the Schwarzwaldstadion. A slipped disc in his back prevented the Breisgauer trainer from taking charge leaving team affairs to his assistant Lars Voßler.

Were his charges able to send him a ‘Get Well Soon’ message in the form of three points? Well, no. Goals from Nicolai Müller and Sebastian Haller saw the Adler to a 2-0 win.

There was no opening day joy for either of the newly promoted clubs, as their Bundesliga bows ended in defeat. Bundesliga II champions Fortuna Düsseldorf took the lead at home to Augsburg only for the Függerstadter to hit back to win 2-1 at the Merkur Spielarena.

Fellow newcomers Nürnberg also suffered disappointment as they lost 1-0 at Hertha Berlin. Der Club did have a glorious chance to equalise late on, but Rune Jarstein saved Mikael Ishak’s 85th minute penalty to deny the Bavarians a share of the spoils.

Wake up today and greet your new overlords of the Rückrunde! You know . . . the only Bundesliga club to start the year by taking nine of nine possible points? No, not Wolfsburg. Yes, they […]

Does Domenico Tedesco Have a Plan B at Schalke?

Two defeats to open the new Bundesliga season was not the start last year’s Vizemeister Schalke were looking for- far from it. There were observers in pre-season who believed the Königsblauen were going to struggle […]

Why Weston McKennie matters so much for Schalke 04

These past two years have been tough for FC Schalke. The third biggest club in the Bundesliga has had trouble keeping hold of players. Which is normal. Plenty of clubs sell off players and keep […]