VfB Stuttgart have become the first club this season to part ways with their trainer following their decision to sack Tayfun Korkut after their matchday 7 defeat to fellow strugglers Hannover. It’s a real case of ‘from hero to zero’ in the space of ten months.

“The lack of development in the course of this season and the negative results have led us to take this step” announced Stuttgart Sporting Director Michael Reschke on Sunday. “Tayfun Korkut took over the team last season in a very difficult situation and secured with an extraordinary run this Bundesliga season for VfB. We are very grateful to him and his two assistant coaches Ilija Aracic and Steven Cherundolo”

So that’s that. Seven games into the new season and the ‘Sack Race’ has been won (or should that be lost?) by Tayfun Korkut. It’s quite the turnaround for arguably a candidate for coach of the season last year.

With the Swabians languishing in 14th place at the Winterpause and young promotion-winning trainer Hannes Wolf relieved of his duties, former Hannover Kaiserslautern and Bayer Leverkusen coach Korkut was the somewhat surprise choice to take over at the Mercedes Benz Arena with the seemingly Mission Impossible to save Stuttgart from an instant return to 2.Bundesliga.

With VfB seemingly in freefall, he steadied the ship with a 1-1 draw against VfL Wolfsburg in his first game in charge before setting off on a run which saw the club soar to a seventh place finish with just one defeat (3-0 v Dortmund) in the final 14 games of the season.

The unlikely candidate had come in and put out the fire that threatened to relegate Stuttgart and astonishingly it was only the fact that Eintracht Frankfurt upset Bayern Munich in the Pokal final that prevented the Swabians from qualifying for Europe!

The butt of more than a few jokes about his coaching ability after what can only be described as ‘patchy career’, the 44-year-old looked to have finally shut up the doubters and so delighted were the club that they extended his contract this summer until 2020.

“The sporting success in recent months has been quite exceptional. But aside from that, the professionalism which the three (Aracic and Cherundolo) have brought to the club, along with the harmony and ambitiousness within the team and amongst the staff, which they initiated, has proven equally important in our decision to continue our cooperation” explained Reschke.

Fast-forward just seven Bundesliga matchdays and the picture is oh so different. VfB have won only one league match (v Werder Bremen) and were dumped out of the DFB Pokal in the first round by Hansa Rostock. The 3-1 loss against bottom side Hannover on Saturday was the straw that broke the camel’s back. So just what has gone so wrong for Korkut and Stuttgart this season?

There is a feeling that Korkut was the right man to inject the necessary impulse into last season’s Rückrunde, but is the wrong man to steer them through this season, where ambitions and expectations are raised. His tactics this season have been defensive to say the least and VfB have failed to score in four of their seven Bundesliga outings. 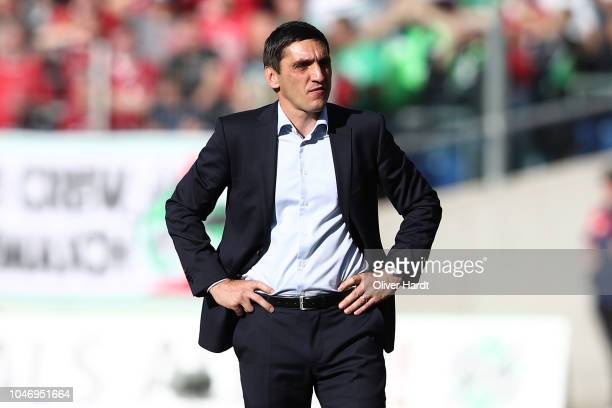 The win against Werder was the first occasion that Stuttgart had shown any real attacking desire and that was very nearly undone by the howler conceded by Ron-Robert Zieler. Any positivity gained from the win over Bremen was however completely undone by the insipid display against Hannover.

So Stuttgart are now seeking the trainer that can develop the squad in the manner that is demanded. In the short-term Andreas Hinkel will step in to train the team, but with the international break upon us, it seems likely a new man will be in the dugout when VfB face Borussia Dortmund in the next game.

The final whistle has blown, the heat of battle has just abated and the Bundesliga trainer is quickly thrust in front of a microphone to give his take on the action. Whether his side have […]

So, another international break is done and dusted and the drought of Bundesliga football is over. Thoughts of the World Cup can take a back seat to the meat and drink of league action. This […]

These are good times at VfB Stuttgart.  Finally.  Let the good times roll…. In the years since the Baden-Württemberg club won the 2007 Bundesliga Championship,  the Swabians have been a rudderless ship, constantly changing coaches […]