The arrival of Paco Alcácer at the end of the transfer window grabbed all the headlines at Borussia Dortmund and looked to have solved their striker problem, but did the Schwarzgelben have another solution a lot closer to home? Dane Jacob Bruun Larsen certainly wants to push for a place in Lucien Favre’s plans after impressive displays in a number of friendless.

With a lot of the attention on Germany’s preparations for their Nations Cup clash with France, few people had their focus on some of the club Testspiele arranged for the international break. Apart from Borussia Dortmund fans that is, who were eager to see the debut of their big signing from Barcelona Paco Alcácer. The Spanish striker lined-up against VfL Osnabrück, but it was team mate Jacob Bruun Larsen, who stole the show with four goals in a 6-0 win.

It had looked like the Dane’s future was uncertain at the Signal Iduna Park after being loaned out last season, but given the chance in pre-season, he grabbed it with both hands. He scored against Liverpool in BVB’s 3-1 International Champions Cup win in Charlotte, NC and also grabbed a hat-trick in a friendly against Swiss side FC Zürich to give new BVB coach Lucien Favre a reminder of his presence.

Since joining Dortmund in 2015 from Lyngby, the attacker has only made one brief Bundesliga appearance amounting to six minutes as a late substitute against Hamburg on matchday 5 last season. He also spent a spell on loan at VfB Stuttgart in last year’s Rückrunde, but again was restricted to a one start and three substitute appearances (one of them funnily enough against parent club Dortmund). 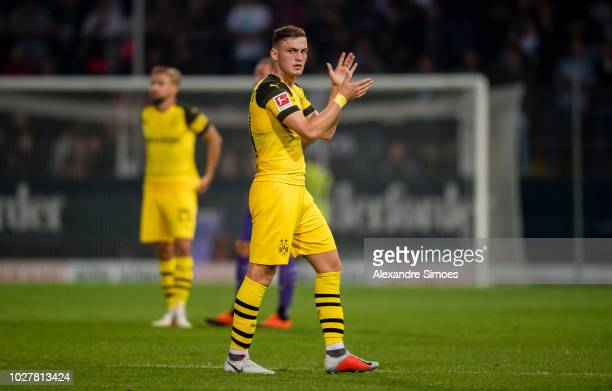 Now it looks like he is ready to push his way into Favre’s thoughts this season. “Mr. Favre gave me some details and information about the possibilities that I have on the pitch. I like that, because you learn a lot from it. We have great quality in the squad, which makes you better every day” Larsen told Bild.

Unfortunately the 19-year-old Dane missed the start of the season with a foot injury meaning he was unavailable for the DFB Pokal trip to SpVgg Greuther Fürth or the Bundesliga openers against RB Leipzig and Hannover.

Usually playing as an attacking wide man, Larsen certainly has plenty of competition in front of him with the likes of Marco Reus, Jadon Sancho, Christian Pulisic, Marco Wolf and Maximilian Philipp ahead of him, but his versatility as a potential striker stand him in good stead.

Borussia Dortmund don’t have a rich pool of strikers backing up Alcácer, with 18-year-old Alexander Isak the only other recognised frontman in the squad. Pre-season and friendlies have seen Bruun Larsen grab the attention- the question is now can he transfer that to the Bundesliga?

Will Uncertainty in Dortmund’s Camp Ruin the Season Finale?

The past week has been full of news and speculations regarding Thomas Tuchel’s future at Borussia Dortmund and the internal dispute that is present between him and the board. Several media outlets have said that […]

This week’s podcast includes Bundesliga Fanatic contributors Niklas and Zulquar take on the German national team, and this upcoming weekend’s match day. You’ll get to know if Germany are the favorites for the Euro 2012, […]

The Rise of Christoph Kramer

When Christoph Kramer’s name was included in Germany’s final 23-man squad for the World Cup in Brazil, plenty of eyebrows were raised. Understandably so, as he was not even selected for Germany’s initial 30-man provisional […]