After a busy week of transfer window spending and European draws, it was a welcome return to the Bundesliga for the second round of matches in the new season.  Bayern Munich unsurprisingly made it two wins from two, and more surprisingly so too did VfL Wolfsburg.

Schalke suffered a second straight defeat as did Bayer Leverkusen, while there was frustration for RB Leipzig as they were held to a point.

We had the usual thrills, spills, highs, lows and everything in between. So just who were the winners and losers of the opening weekend?

There has been plenty of eye rubbing and scratching of the head this weekend as the reality sinks in that VfL Wolfsburg have won both their opening games and sit level at the top of the table with reigning champions Bayern. Yes seriously! Check for yourself!

Not only have they won two, but both victories have come against teams forecast to potentially challenge the Bavarians for the title this season. Following a deserved win over Schalke last weekend, the Wölfe downed a much fancied Bayer Leverkusen at the Bay Arena winning 3-1.

Are these imposters? Is this the same club that only survived last season (and the one before) courtesy of the relegation play-off?

Bruno Labbadia (yes that Bruno) has his charges playing some incisive and attractive football, which has left many observers gobsmacked. The new signings Jerome Roussillon and Wout Weghorst both had really good games as did Josip Brekalo, John Anthony Brooks and Ignacio Camacho. Goals from Yannick Gerhardt, Weghorst and Renato Steffen sealed the win after Leon Bailey had fired the hosts in front.

The bubble is bound to burst, but for now Wolfsburg fans, make hay while the sun shines.

Two games and three goals puts Hoffenheim striker Adam Szalai at the top of the nascent Bundesliga scoring charts ahead of Robert Lewandowski and Thomas Müller.

Having scored last week in the season opener against Bayern, the Hungarian forward grabbed a Doppelpack at home to Freiburg to help TSG to a 3-1 win. His first came five minutes into the second half and saw the home side equalise Dominique Heintz’s opener. He capitalised from a terrible mix-up between goalkeeper and defender to score a simple goal.

His second came after an incisive low cross from Nico Schulz picked him out and he stroked past Alexander Schwolow to set Julian Nagelsmann’s side on their way to a first win of the season. 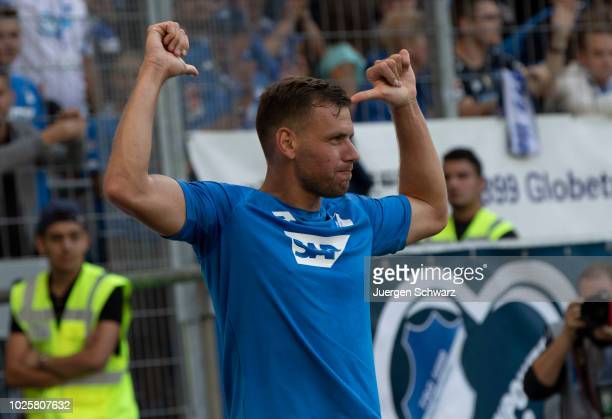 Getting your first Bundesliga goal is always special and there was no shortage of players on matchday 2 waiting to celebrate opening their scoring account. The game between 1FC Nürnberg and Mainz at the Max Morlock Stadion ended all-square at 1-1 with both Jean-Philippe Mateta and Mikael Ishak grabbing their first top flight goals. It was all the sweeter for Swedish striker Ishak coming a week after his missed penalty cost his side a share of the points against Hertha Berlin.

VfL Wolfsburg shocked Leverkusen with new Dutch striker Wout Weghorst scoring their second and midfielder Renato Steffen wrapping up the win with the third. The 6ft 6 inch Weghorst had the simplest of headers, while Steffen took advantage of some lax defending from stand-in full back Leon Bailey to fire home.

Borussia Mönchengladbach were held away at FC Augsburg and had new French striker Alassane Plea to thank for their share of the spoils. The summer arrival from Nice was on the bench once again, but replaced Raffael at half-time and rewarded Dieter Hecking with a powerful header on 68 minutes to equalise for die Fohlen.

That’s how you mark your first Bundesliga start for Bayern. A fine strike opened the scoring at the Mercedes Benz Arena just when it looked like VfB Stuttgart had done enough to take Bayern in all-square at half-time. He then provided the assist for Robert Lewandowski’s just after the hour mark with a fine lay-off.

Overall he had 6 shots and revelled in the role usually occupied by Thiago (the Spaniard had dropped into Javi Martinez’ number 6 role).  Competition for places in the Bayern midfield is going to be fierce this season, but Goretzka’s performance on Saturday has shown coach Nico Kovac that he is ready to deliver when called upon.

Hertha returned to Berlin on Sunday evening with all three points from the Veltins Arena for the first time in 14 years and a large part of their success against last season’s Vizemeister goes to two-goal hero Ondrej Duda. The Slovak midfielder opened the scoring on 15 minutes as he slammed home a shot with great composure following a fine cut-back from substitute Javairo Dilrosun.

He bagged his second in stoppage time curling in a fantastic free-kick awarded after Yevhen Konoplyanka had been sent-off for pulling down Dennis Jastrzembski.

Rune Jarstein had a good game denying Mark Uth a late equaliser and all in all it was a marvellous tactical display from Pal Dardai’s side which gives them six points from two games and a share of top spot with Bayern and Wolfsburg. 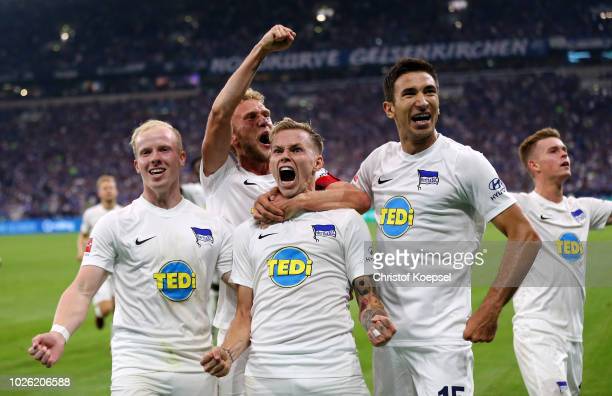 It all began so brightly for Leverkusen when Leon Bailey rifled in an exquisite shot on 24 minutes against Wolfsburg- the Werkself were back in the groove following their upset last week at Mönchengladbach.

They were soon however jolted out of their groove by a combination of bright play from the visitors and poor defending. Keeper Ramazan Özcan was beaten from a crazy angle by Yannick Gerhardt (later credited as an own-goal) and then with Wendell lying injured, nobody thought to cover for him allowing the giant Wout Weghorst to head in. If there is one player you don’t really want to leave unmarked from a cross- its Weghorst.

Heiko Herrlich tried to respond by switching Leon Bailey temporarily to left back, but that backfired with Renato Steffen exposing the huge gap between Bailey and Aleksandar Dragovic to hit Wolfsburg’s third. Game over and a second successive loss for Leverkusen.

When you spend the night in hospital following a Bundesliga match, you know you’ve had a bad day. A poor back header from Ludwig Augustinsson against Eintracht Frankfurt forced the Werder Bremen keeper into action, but he only succeeded in clattering into Mijat Gacinovic. The Grün-Weißen custodian was knocked unconscious and was unaware that he’d conceded a penalty.

Referee Sören Storks was magnanimous enough not to book the Bremen keeper for the penalty. Can you even book someone who is unconscious? Stretchered off and taken to hospital, the Czech international missed his side’s 96th minute winner from Milot Rashica (injury time added on for his injury!) 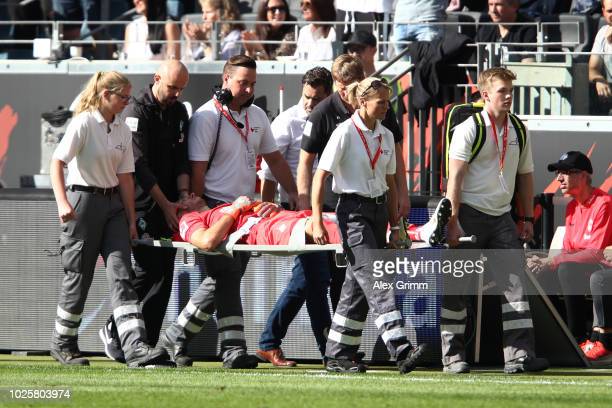 Oh dear, oh dear! This was not the way it was supposed to go. Vizemeister Schalke have had a rude awakening this season and Sunday’s home loss to Hertha Berlin will serve as a big wake-up call. Their second defeat on the trot has proved that just because you finished second last season, it doesn’t mean you are going to have a walk in the park this time around.

Hertha Berlin were deserved winners on an afternoon full of woe for the Königsblauen. It began with Daniel Caligiuri missing a penalty (his first-ever miss from the spot) and then conceding almost immediately from a swift counter.

They had Yevhen Konoplyanka sent off and then conceded a late second to heap on more woe. Defensively they were poor at times with Weston McKennie caught out for the first goal and poor communication between Naldo and Baba Rahman at times. Sebastian Rudy had a disappointing debut and was subbed off after 51 minutes.

Could it be that clubs have figured out Schalke? Domenico Tedesco built the success of last season on reacting to teams’ attacks rather that going after them. Schalke’s coach may need a Plan B if they are to repeat last season’s Champions League qualification.

The defensive injury woes just keep piling up for Julian Nagelsmann at Hoffenheim. Having seen Kevin Vogt injured at Bayern on the opening day, there were more problems for his back-three to deal with against Freiburg this week.

Vogt was back, which was a positive, but against the Breisgauer Nagelsmann lost Ermin Bicakcic, Kasim Adams and Kevin Akpoguma to injury. It could be that Havard Nordtveit is set for an extended run in the side if the injuries prove serious and I think we all know that’s not going to end well.

There are probably some out there who would deem Borussia Dortmund’s Maximilian Philipp a handsome man. Looking in the mirror the BVB attacker is in all likelihood pleased with what he sees reflected back at him.

That however perhaps wasn’t the case following Friday night’s clash with Hannover and his personal clash with Waldemar Anton’s head. Meeting a Marius Wolf cross on the hour mark, Philipp was unlucky to see his header hit the post- he was even unluckier to also connect with the Hannover captain’s head.

There was blood everywhere and Philipp’s nose appeared spread across his face. Not a pretty sight. 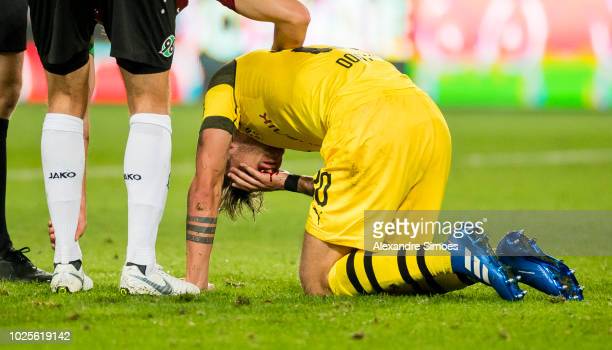 FC Schalke put together another solid 2-0 win to see themselves into second place in the Bundesliga table, the highest they’ve been in five years. And while they had periods where they weren’t the most […]

The second round of the DFB Pokal provides some midweek action with 32 team still in the competition and dreaming of progressing further towards the May final in Berlin. Sixteen ties take place on Tuesday […]