New Borussia Dortmund signing Paco Alcácer will be hoping his move to the Bundesliga will give him a chance to rediscover himself after seeing his career stagnate at Barcelona. The one-time ‘Next Big Thing’ was forced into the shadows at the Nou Camp following his big money move from Valencia. Can he now emerge into the limelight at the Signal Iduna Park? Have BVB found the missing piece of the attacking jigsaw in the Spaniard? Let’s take a look.

Alcácer’s move to Catalan giants Barcelona in the summer of 2016 seemed the perfectly logical next step in his career, having established himself as one of Spain’s, and indeed Europe’s, most-exciting striking prospects. Produced by a renowned Valencia academy that had previously given us talents such as Juan Mata and David Silva, his talent was there to see from a very early age.

Indeed, the Valencia-born forward impressed so much as a teenager, that he was handed his first-team debut for the B-team aged just 16. He soon saw his reputation spread beyond the confines of La Liga when he starred for Spain at the U-17 European Championships, finishing as the tournament’s top scorer with ten goals.

A season on loan at Getafe honed his skills before he became a regular in the Valencia front line the following season. In his three full seasons at the Mestalla for the first team, he scored 30 goals in 93 La Liga appearances, adding a further 13 in various cup competitions. 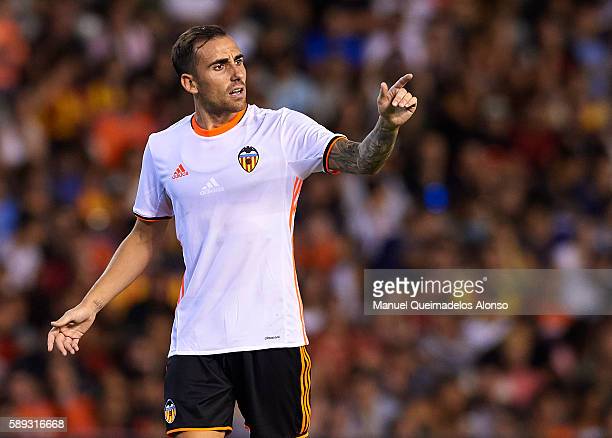 So what went wrong for him at Barcelona?

Joining the Spanish giants for €30 million, he would have been perfectly aware of the competition for places and the battle ahead of him. In front of him in the pecking order were none other than Lionel Messi, Neymar, and Luis Suarez, so clearly Alcácer was a ‘fourth-choice’ for coach Luis Enrique.

The sale of Neymar to Paris Saint Germain didn’t exactly improve his outlook, with the club splashing out huge sums to add both Ousmane Dembélé and Phlippe Coutinho to their forward line.

Last season, he made 17 appearances, mostly as a substitute and was not included in the squad at all on five occasions. He sat on the bench as an unused sub eleven times. This season would have seen much the same scenario played out, so this switch to Dortmund will give him the chance to get regular game time under his belt and hopefully a return to the goal trail.

So off to Borussia Dortmund goes Alcácer and the question on everybody’s lips is: Can he be the one to finally fill the goal scoring void left by Pierre-Emerick Aubameyang? There was talk of the Schwarzgelben going into the season without a recognised central striker, perhaps relying on either Maximilian Philipp or Marco Reus, but the acquisition of Alcácer gives the team a much better balance.

What is also interesting is that the player’s strengths are precisely what Dortmund need right now, while his weaknesses can be more than compensated by the players he will find around him in the attacking third of the pitch.

The 24-year-old is a penalty box striker with a killer instinct and nose for goal. At 1.76 meters, he has the physique to handle himself against defenders and has deceptively quick-feet and a very good first touch. He’s an intelligent player not averse to pulling his markers out of position with decoy runs. He also possesses enough pace to be able to race in behind a defensive line.

But first and foremost, Francisco Alcácer García (to give him his full name) is a classic finisher.

As with many out-and-out strikers, the defensive side of his game is not a strength. Tracking back, marking, and tackling are not areas he excels in. Nor is his build-up play outside of the penalty area. While Dortmund head coach Lucien Favre is known for his tendency to play without a traditional striker (think Raffael at Borussia Mönchengladbach), BVB certainly are not, with the likes of Lucas Barrios, Robert Lewandowski and Pierre-Emerick Aubameyang taking centre stage down the years.

Favre will be happy to let the likes of Marco Reus, Mario Götze, Christian Pulisic, and Jadon Sancho et al. take the slack, leaving Alcácer to pop the ball in the back of the net.

It had been reported that FC Porto, Real Betis, and Deportivo Alaves were interested in taking the striker, but Dortmund’s success in securing a €2.2 million loan deal with an option to buy for €20-25 million at the end of the season could prove to be a great piece of business from Hans-Joachim Watzke. If last season’s success with Michy Batshuayi can be replicated, then Paco Alcácer will have found his much sought reincarnation at the Signal Iduna Park.

Matchday 29 saw Bayern Munich gain the three points they required to secure a sixth-successive title, but there was plenty more action elsewhere to keep the interest high. The race for the Champions League places […]

Goals, goals, goals. BVB’s 14-year-old striker Youssoufa Moukoko has taken Germany’s youth football scene by storm. After joining Borussia Dortmund from 1. FC St. Pauli back in 2016, the youngster has made headlines all around […]

I understand how it’s not likely Monday morning in most of the world where Bundesliga football news slapped together in English is likely to be read. I do. Yet, it IS Monday morning where I […]