In 1996, a young striker from the coast of Peru with Italian background made his debut with one of Peru’s highest altitude clubs, Deportivo Pesquero. Flashback to 1978, Claudio Miguel Pizarro Bosio is born during a rise of conflict. The Communist militant group known as “Shining Path” is about to engage in a guerrilla warfare with the Peruvian government while destroying the Peruvian countryside. The far-left group appealed to the peasants of the nation and quickly grew in terms of popularity, controlled land, and military manpower. The conflict escalated to the point of the government enlisting locals into militia to engage the rebel Shining Path forces. The Peruvian government also allowed the military to arrest and detain anyone suspicious. This led to soldiers abusing the granted power, arresting scores of innocent civilians and raping or torturing many. As this all played out, Claudio Pizarro trained and developed into what would become one of the best footballers Peru had ever seen.

Back in 1996, Pizarro made his debut at just age 17, as he appeared for Deportivo Pesquero, a side that no longer exists under the same name. Two weeks later, he scored his first two goals in a brace victory over Atletico Torino. After just two seasons and 11 goals in a mere 41 matches, Claudio Pizarro took his first step up with a transfer to Alianza Lima. Pizarro’s first season with the side from his hometown struggled to amount to anything spectacular. He managed just 7 goals in 22 matches.

In 1999, he broke out and, after scoring 18 goals in 22 matches with his club, Pizarro transferred to Werder Bremen for €1.5m and would later make his Peruvian national team debut. Pizarrinha (what a Twitter handle!) became the first Peruvian in the Bundesliga and managed 10 goals in 25 matches. In his second season with the club, he upped his goal tally to 19 in 31 matches. His 29 goals in two seasons justified his talent and capabilities in top leagues led to a transfer saga. The saga erupted into a must-watch chase when Bremen’s board declared a move was possible for the Peruvian. After a chase from top sides, Bayern München secured his services.

Bayern München’s capture of Claudio Pizarro provided a spotlight to Peru, especially after it took him just two matches to score for his new club. Claudio Pizarro’s rise created a demand for Peruvian players, for the next Pizarro, in a similar fashion that Borussia Dortmund’s star Christian Pulisic has caused for American players. Pizarro joined Bayern München for a disappointing first season where the club failed to retain the Bundesliga title (finishing third) and the Champions League title (eliminated in the quarter finals) despite his 15 goals in 30 league appearances. Der Andenbomber, or The Andes Bomber, and the Bavarians enjoyed a much better Bundesliga campaign that would lead to a title the following season along with a DFB Cup win. Pizarro managed a second season in a row with 15 goals, this time in 31 appearances. The ups and downs of football can be harsh. 2003-04’s campaign for Pizarro proved to be tough as he only managed 11 goals in the same amount of appearances as the previous season while Bayern only managed to finish in second and not win a trophy. 2004-05 proved to be another struggle. Despite Bayern’s Bundesliga and DFB Cup wins, Pizarro again only managed 11 goals in a limited 23 matches. In need of a bounce-back campaign, Pizarro went in to the 2005 season hoping for success. Instead, he again got, you guessed it, 11 goals. The Pizarro era of Bayern appeared to be in doubt. In 2006, Pizarro appeared a career high 33 matches. With one extreme came another, as he experienced a Bundesliga career low 8 goals. As the appearances increased and the goals decreased for the Peruvian star, it was obvious he needed to move on. A free transfer abroad signified the end of an era.

In hopes of a refreshment in his career, Claudio Pizarro traded Bayern red for Chelsea blue. Pizarro appeared in 21 Premier League matches but scored just 2 goals, marking a career low. If hitting rock bottom can be embodied in one footballer, it is Claudio Pizarro in 2007. During March 2008, while on international duties, he and three of his Peruvian teammates were accused of breaking curfew for a party after a 1-1 draw with Brazil. Not only did Pizarro organize a party, it reportedly had alcohol and prostitutes. Pizarro was hit with an 18 month ban from international duties and a fine because of it. Chelsea still maintained hope that Pizarro had what it took to recover his form and return to dominance. The key to Claudio Pizarro’s form return, in Chelsea FC’s eyes, was a loan move to the WeserStadion and Werder Bremen.

So in 2008, the former Bremen star arrived for his second stint at the club. Werder Bremen managed to finish 10th in the Bundesliga and were eliminated in the UEFA Champions League group stage, but still won the DFB-Pokal title. Keeping Bremen from falling any further was none other than Peruvian star Claudio Pizarro. A swift 17 league goals marked his best performance since 2000. He played so well for Bremen, an affordable €2.0m was paid out to Chelsea’s mega-rich owner Roman Abramovic and his London side to keep Pizarro in town. Without the added stress of playing in the Champions League for his second season, Pizarro and his teammates could focus on the domestic league more. This resulted in a third place finish and a return to the Champions League for the club, but Pizarro did not produce the same tally as he had the previous season. In fact, despite playing the same amount of matches, his goal tally again fell (16).  As the 2010-11 campaign appeared with the chance for glory on not just domestic cups but also the Champions League, Werder Bremen again struggled. The club fell all the way down to 13th and narrowly avoided the relegation playoff. Pizarro suffered the worst season in his career up to this point with Werder Bremen, scoring just 9 goals in 22 matches. However, Pizarro still led the team in goals. Desperate to improve both personally and on the club level, Pizarro went into the 2011-12 season smiling and hoping for the best. He left with mixed feelings. Again he led the club in goals scored (18, which doubled his previous season’s tally) but Werder Bremen still finished in 9th, comfortably midtable. Similar to his first stint with the club, it was time to move on to a certain Bavarian club.

Claudio Pizarro joined Bayern for the second time in his career, this time on a free transfer. The man popular with the fans was kindly welcomed back to the club with open arms from many. Der Andenbomber joined knowing he would not be a regular starter like he had been for all of his career. This time he would have to adjust to the life of being the backup striker, to German international Mario Gomez and Croatian star Mario Mandžukić. Pizarro ended up making 20 appearances in his debut return season for Bayern, but only managed to score 6 goals with many of those appearances off the bench. The season came to a close and Pizarro, at this point already 34, had no contract. Finally in mid-July, Bayern offered an extension and he graciously accepted. In the 2013-14 campaign, Pizarro managed to score more goals (10) than matches he started! Despite his age, his 7 starts and 18 substitution appearances proved he still had it in him to get the job done. The following season became a stark contrast. In 13 appearances, Claudio Pizarro scored 0 goals and the clock struck midnight at Bayern München. At the age of 35, Pizarro came off his only goalless season in his career and had no club. 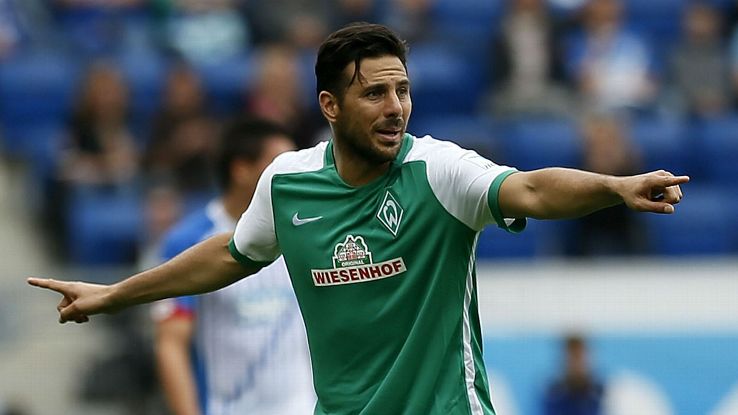 After spending two months as a free agent, Claudio Pizarro re-joined, for a third time, Werder Bremen. The reunion occurred after the season had begun, on September 7th to be exact. With that being said, Pizarro was in the twilight of his career upon his return and he could no longer be fully relied on to be the leading goalscorer of the club…or could he? In his return season, he yet again lead Bremen with 14 goals in 28 appearances. Bremen struggled again, however, with a 13th place finish and even that is flattering: they needed a late winner from Papy Djilododji to climb out of 16th. The man from Peru could not carry the team any higher, that much was clear.In the summer of 2016, Max Kruse arrived alongside Serge Gnabry to take the weight off the veteran’s shoulders. Nagging injuries that have largely avoided him in the early parts of his career have started to take their toll: he missed ten games right out of training camp and never really made it back into the fold, finishing with just a lone goal in 854 minutes, a far cry from the 14. Serge Gnabry went supernova in the fall with seven goals and  in the spring when he got healthy, the team climbed to 8th thanks to Max Kruse who had 13 and his partner Fin Bartels who scored six of his eight in the Rückrunde. Alexander Nouri and Werder made a concerted effort to get younger and there was a feeling that the heroes of yesteryear, long-time captain Clemens Fritz who retired midseason and Pizarro were not missed on the field.

As the story goes, all good things must come to an end. On July 3rd, 2017, it was announced that Pizarro has departed the club.

At 38 years old, Der Andenbomber leaves behind a legacy of being the Bundesliga’s highest all-time foreign goalscorer with 191 goals in 430 appearances. Not only does he hold a place in the league record book, he will be regarded as a legend for both Bayern München and the club that always gave him a chance, Werder Bremen.

Only time will tell where Pizarro will end up, but it is incredibly unlikely that it is at a top Bundesliga club. Pizarro firmly believes he has one season left in him. The papers are no longer writing transfer rumors about Pizarro and no one seems to quite know where he will end up or what club will offer him a contract. A return to his hometown club of Alianza Lima would be a picture perfect way to end the chapter of history Pizarro has given us.

While the world waits to see where Claudio Pizarro ends up, no one can say anything but “Thank you for the memories, Claudio!”

Hailing from Ohio in the U.S., Aidan started watching soccer to better understand the game he played. Now he's a coach specialized in goalkeeper training, and loves writing about the Bundesliga. Aidan's true love is Borussia Dortmund, but respects the passion of all Bundesliga clubs (even Schalke). Aidan also contributes writing to the Yellow Wall Pod and underthecoshblog.com (Canadian soccer coverage). You can find him on twitter @aidan_reagh.

Five Questions Ahead of Bundesliga Matchday 3

With the first international break coming up, we look forward to a full weekend of Bundesliga action before the players depart to their respective countries. As a way of previewing the action, let’s take a […]

As the anticipation builds ahead of the new 2019/20 Bundesliga season, attention turns to the prospects of the 18 top flight German sides and what the coming campaign has in store. Here at the Bundesliga […]

The Bundesliga has truly been amongst the most unpredictable leagues over the last ten years. Six different teams have won the title between the 00/01 and the 09/10 season. A number of historic clubs were […]