The Bundesliga is now firmly in its Winterpause. But fear not, Bundesliga fans, we have you covered with all the analysis on what has been arguably the most exciting Hinrunde since Hoffenheim’s march towards Herbstmeister in 2008\09. Rather than list all of the accomplishments, we’ll jump into an analysis of which teams, players and coaches have surprised and\or disappointed us.

Current title odds are still with Bayern, with the Bavarians a 1 to 6 favorites to take home die Meisterschaft (prior to Wednesday’s monumental clash with Leipzig) ahead of RB Leipzig, who are 8 to 1 and BVB who sit on the outside looking in at 25 to 1. No signs of Leverkusen, Gladbach and\or Schalke, whom many pundits and sites picked to challenge Bayern\Dortmund duopoly. We’ll get into the specifics of why and how that has gone, but first, here then are the teams that SURPRISED us and Bundesliga fans all around the world!

RB Leipzig are undoubtedly the story of the season, despite the two losses in the end last three matches. They’ve gone toe to toe with Bayern (despite that beatdown on Wednesday) for all of the 16 matches, with the advanced stats and Expected Goals models (all three of them – Michael Caley, Alex Rathke and Sander \11tegen11)and on field performance all proving that their rise has not been a fluke. Here’s Alex Rathke’s model

RB Leipzig have appeared on the edge of the Bundesliga title projection!
And skyrocketed into the top-4 odds. pic.twitter.com/0cxuuGIkrb

and that’s not to mention the countless excellent traditional pieces on them. The notion that they are reinventing or dismantling the Bundesliga has been well-dissected by VAVEL’s Jonathan Walsh.

Naby Keita, Emil Forsberg, Timo Werner and Willi Orban in particular have stood out are among the top 3-5 players at their positions at  Kicker, while Ralph Hasenhüttl has gone from hipster coach of the year pick (Ingolstadt last year) to actual coach of the year favorite and is involved in Arsenal and Bayern rumors. For a guy who was out of a job in 2013 after leaving the third division side VfR Aalen, it’s nothing short of a fairytale as we learn from the brilliant interview with the coach by Archie Rhind Tutt .

There is very little to add to those excellent analyses, and it’s very hard to make the argument that RB Leipzig have not done things in a sustainable way, as both on field performance, analytics models and tactics sites like SV are all in agreement.

Let’s move on to another surprising team instead.

Hertha are at it again, destroying XG goals models – they are currently the best team at overperforming their XG difference with over 11 goals per the aforementioned Alex Rathke and the excellent Challengers Podcast

At this point we know what the Dárdai blueprint is and it goes something like this: 1. pick up Bayern and Nürnberg castoffs and other misfits (the older the better). 2. get your number two goalie to be top 3 in save percentage 3. ride a sky high conversion rate from an overlooked striker 4. be super solid in defense 5. play the ball back to the keeper a lot and do not take any chances. 6. lead the league in PDO and other luck categories 7. take no more than ten shots a game. 8. turn fringe players like Alexander Esswein, Valentin Stocker, etc into valuable rotation pieces. 9. admit that you probably cannot compete against the very top teams (maulings by Bayern and RBL who allowed a combined FIVE shots in 180 minutes to Hertha – and at least two of those were very generous by the scorekeeper) unless something whacky happens (see BVB game) but also 10. acknowledge that you can hang with everyone else.

Jack Grimse questioned their sustainability in this piece which is almost the exact same piece I wrote on them in March. The tactics writer Tom Payne was much more bullish on their season last year and wrote a fantastic breakdown of all of the on the field work that Dárdai has done with BSC last year, and much of that still applies this season, although Kalou and Darida have been less involved and Ibisevic and Mitchell Weiser (until an injury in the second half of the Hinrunde) have taken on a more meaningful role. The 64,000 dollar question is whether that trend will continue or whether they repeat this from last year?

Hoffenheim have gotten their fair share of praise and much of it was focused on their 29-year-old coach Julian Nagelsmann, with the NagelsmannTabelle (on which TSG are the third best Bundesliga team since he took over on February 11th of 2016) becoming one of the buzzwords of the league. Still unbeaten after 16 games (albeit with 10 draws) they have improved their already potent offense with a few key additions – Sandro Wagner has not only brought his goalscoring boots from Darmstadt, but has actually become a *gasp* good Bundesliga striker. Kerem Demirbay – a 23-year-old who did not cut it at the offensive juggernaut that is HSV has blossomed into a legitimate star – posting impressive numbers of two shots/dribbles/key passes\interceptions and 1.7 tackles per game for a mere 1.7 million! His radar chart courtesy of @FussballRadars is a thing of beauty: 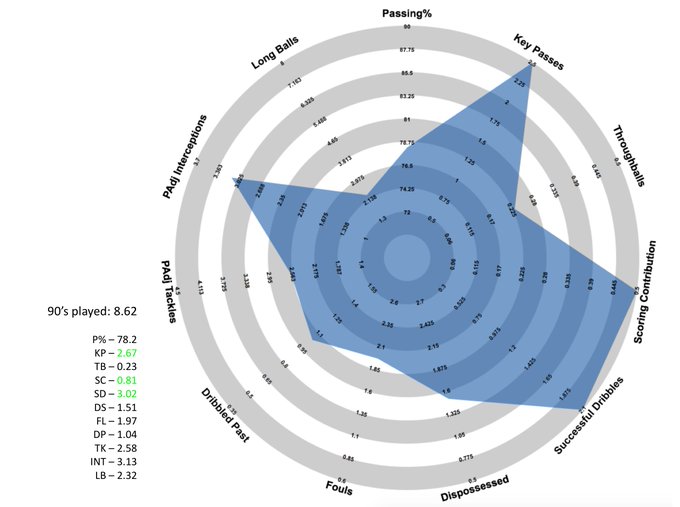 Kerem Demirbay – Bundesliga of the Hinrunde 16/17 [for @ZidGeezer]

and Benjamin Hübner who left Ingolstadt for just 800k to provide stellar defense, near 90% passing, a constant threat on set pieces and occasional assists. Who could have predicted this? Alexander Rosen and the scouting department deserves all the credit. Nagelsmann has been able to maintain their level of performance despite a few mitigating factors: discovering that Hübner is superior to Bicakcic and Schar, while Kevin Vogt is also a much better CB than those two who started most of the games last season. Niklas Süle is the third amigo in that group, and while TSG still allow a ton of shots (198 per Footyintheclouds) and deep completions (per Statsbomb) it is only the fifth to sixth worst in the league and Oliver Baumann might actually be able to use his arms a little less. I am happy to report that the TSG goalkeeper who made a league high 151 saves is now second in that category to Marwin Hitz who has saved 61 shots to his 58. In other words he is making one fewer save per match this year at 3.6 per compared to 4.6 of last season and sports a Bundesliga best 81.8% save percentage! Sebastian Rudy’s defensive prowess has earned him not only some German national team playing time, but a contract at Bayern from the summer, and the three back system with agile, athletic wings like Pavel Kaderabek and Jeremy Toljan has also helped solidify the back line.

In terms of attack, the main hub has been Andrej Kramaric, who has been able to increase his shot volume from an already excellent 3.5 per 90 minutes to nearly four – a level that only Modeste, Lewandowski and Anthony Modeste approached this fall. So why is it that Kramaric only has 3 goals and those other guys are all in double digits? There are a few reasons but shot location is one:

The Croatian takes almost half of his shots (1.6) from outside the box, which is in the top 10 in the league. 2. Many of his shots don’t make it on target – from his overall 3.9 shots per 90 minutes 0.9 or nearly 25% in fact get blocked, while 1.8 or 46% end up off-target. Robert Lewandowski is surprisingly the lone player ahead of him in the off-target shooting department, but while the Pole has gotten 26 of his 70 or 37% of his shots ON TARGET, Kramaric managed to get just 15 of 49 or 30% on goal! Thus, his non penalty expected goals total is just 4.44, while his actual output included two goals.

While there’s a large element of randomness – conversion rates are not very repeatable from year to year – Kramaric’s 7.9% is well below the 10.3% league average. That number is usually higher for strikers and 14-15% is generally regarded as excellent, though Lewandowski (21%), Vedad Ibisevic (23.5%), Modeste (29%), Timo Werner (29.6%) Sandro Wagner (30%) and Aubameyang (31%) are all currently well beyond that. There’s also perhaps a stamina issue with him, as I’ve noticed that Nagelsmann likes to pull him at the 60 minute mark – he has only played the full 90 six times – and has even dropped him from the starting XI in the last two matches.  Mark “if he stays healthy” Uth was favored over him alongside the irreplaceable Sandro Wagner (again not a description that has ever been used about the former Bremen\Hertha\Bayern\Darmstadt forward) and the fellow 25-year-old has scored five goals in roughly half the minutes despite suffering a pretty serious muscle tear in late September that forced him to miss two months!  Kramaric’s strengths lie in his ability to set up his teammates, as he has provided a team high five assists.

The midfields’ efforts in supplying the attack should not go unnoticed, as the aforementioned Rudy, Demirbay – a combined seven assists and both are in the top 30 in the league in Key Passes per 90 – are helped by the continued development of Marco Reus’ newest best friend Nadiem Amiri who is adding 1.7 shots, dribbles and key passes per 90 to the mix.

All of that has given TSG a potent and sustainable offense that has scored 28 goals, which is right around their XG total of 26.5 with the league’s fourth best XG\90 ratio of 1.66 per the Challengers Podcast

Back with more in-depth pieces on some other teams tomorrow!

editor at BundesligaFanatic
Abel started out watching and playing soccer in Hungary, before falling in love with the Bundesliga in the mid -90s (thanks to Kicker and Sat1's Ran). Now, he's in the USA -- and still loving it all many years later. Abel is faithful to BVB, but also endlessly fascinated by the emergence of new teams and talents from Germany, to the point that he even started a website about it, at www.bundespremierleague.com. Otherwise, you can find him working in publishing, teaching ESL, and/or drinking craft beer - not necessarily at the same time, or in that order. Abel tweets at @VanbastenESL and @BundesPL

Bundesliga Fan Groups in the USA

It was still dark out when this Missouri Bundesliga fan stumbled out of bed Saturday, August 15, to prepare for the hour and 45 minute drive to a German pub in Kansas City for day […]

Champions League Draw- What it Means for the Bundesliga Clubs

The much-awaited draw for this year’s Champions League has been made in Monaco with those little blue balls being drawn from Giorgio Marchetti’s bowls. There are some intriguing match-ups for this year’s group stage involving […]

The second round of the DFB Pokal provides some midweek action with 32 team still in the competition and dreaming of progressing further towards the May final in Berlin. Sixteen ties take place on Tuesday […]