New York, London, Madrid, Boston, Brussels, Paris, Istanbul, Orlando, Nice, and too many Middle Eastern cities to count. On December 19th, 2016, my birthplace and hometown Berlin was added to the list of cities hit by a major radical-Islamic terrorist attack. 2016 will go down as the year when our luck ran out, because a Tunisian ISIS operative stole a Polish truck and drove it into a Christmas Market at Kurfürstendamm. He killed a dozen people and injured 56.

How will the Attack affect BHertha BSC & the Bundesliga Stand Strong in Wake of Terrorist Acterlin?

The truck crashed into the festive market just three kilometers away from where I live. Basically, ISIS has struck within 20 minute walking distance of me. Way too close!

All of a sudden, the possibility of becoming an ISIS victim felt real. I always hoped I would never see the “I am safe” button on my facebook feed, but there it was.

However, Berlin’s day-to-day life has carried on, and the Christmas Market that got hit on Monday actually reopened after a two-day break. Carrying on is probably the best way to show ISIS that we Berliners don’t care about them. Nevertheless, nobody should downplay the magnitude of the attack. First of all, the victim’s families must receive all the support Germany has to offer, and once they are taken care of, we need to make sure this never happens again by all constitutional means necessary.
Yet, no matter how tragic the Berlin attack was, it’s important to keep things in perspective.

By contrast, Chicago (population 2.7 million) already had 755 murders in 2016 by December 23rd. European cities like Rome, Paris, London, Turin, Marseille, Rotterdam, Warsaw, Budapest, Belfast, and Glasgow all have much higher crime rates than Germany’s capital. Despite the Christmas Market massacre, Berlin is still one of the safest large cities on the globe. Tourists are safer here than anywhere else, and we as Berliners are blessed to live here.

Of course, Berlin’s #1 football club, Hertha BSC, was also devastated by the attack. The Charlottenburg borough is home to the fancy Kurfürstendamm Boulevard, where the attack took place. “Ku’damm” is Berlin’s 5th Avenue, so to speak. Since the area is also relatively close to the Hertha training facilities in Westend, quite a few Hertha players, officials, and their families live in apartments close to the scene of the attack.

Hertha coach Pal Dardai, who had to get his team ready for a Wednesday match, took his players and staff to Breitscheidplatz on Tuesday. It was an important gesture and the proper response to the terror attack, because Hertha is part of West Berlin’s DNA. The fact that Hertha was playing the match showed people that things are under control.

Unfortunately only 31.000 Berliners attended the game. I wouldn’t read too much into the below-average crowd. After all, it was a midweek evening match in the freezing cold, and the opponent was SV Darmstadt 98, a team that rarely draw good crowds as a visitor. 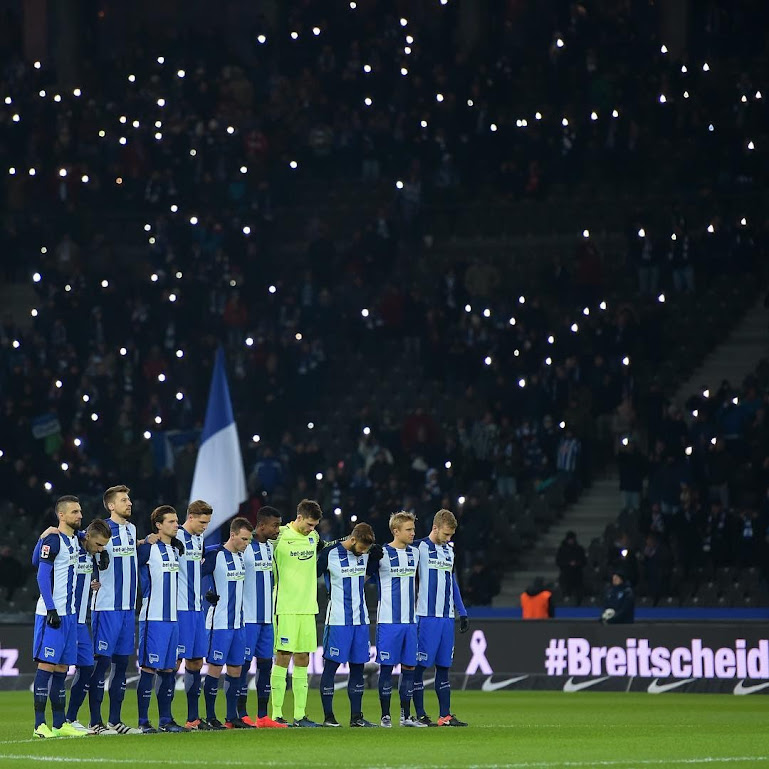 All in all, it was a worthy display by the club and its fans. Anti-Islamic banners or chants were not seen or heard that night, and after the pregame moment of silence, it was a just another Hertha game. By the way, Hertha won 2:0 and finished the Hinrunde 2016 on an amazing 30 points. But that ended up being the least-relevant aspect of the night.

Hertha and Darmstadt played and didn’t shy away because of Islamic terror threats. The club sent an important messages to Berliners that “life goes on,” as did the 17 other Bundesliga clubs who played during this “Englische Woche.”

All in all, Berlin locals dealt with the attack pretty well, but the nationwide political implications of the attack will keep German politics busy for much longer. The Bundesliga will also be affected when security concepts at public venues will be reevaluated.

What about Bundesliga stadium security?

Bundesliga stadiums obviously could make for high-profile targets for ISIS operatives. Some may have forgotten how narrowly German and French supporters escaped death during the Paris attacks of November 2015.

To be honest, ever since those attacks, it has been very unsettling to see how easily ultras manage to sneak illegal fireworks and smoke grenades into Bundesliga grounds on a regular basis.

If determined football fans can do it, ISIS-trained terrorists can do it. Whether supporters like it or not, the DFL needs to tighten gate security and hand out tougher sanctions for bringing illegal stuff into the arena.

Unfortunately, it’s not just a game anymore. Every little bang and small cloud of smoke must be taken seriously by police now. Therefore, I really hope ultras groups will show they have some sense and lay-off of the pyrotechnics for a while. In case ultras keep up the shenanigans, all-seater arenas, personalized tickets, and alcohol bans might be the consequences. Policemen aren’t working in Bundesliga stadiums on match day rather than spending time with their families because they want to harass ultras and kill all the fun. Those men and women protect our lives. We need them to focus. People who cause unnecessary distractions put the lives of thousands in jeopardy. Ultra supporters will either get it, or we’ll have boring Premier League-style stadiums within the next five years.

Anybody who’s been to a Bundesliga game has probably noticed how densely packed the areas outside of the stadiums can get. At the Olympiastadion in Berlin, an ISIS operative would not even need to buy a ticket and get past security to carry out a devastating attack.

Moreover, ISIS is not the only a threat to German football culture. It seems that right-wing propaganda is making a comeback in German stadiums. The ongoing inner-German cultural war between progressives and national-conservatives is also being fought in football arenas all over Germany.

Bundesliga arenas have become very safe and free of neo-Nazi activity ever since clubs started to hand-out stadium bans to right-wing extremist hooligans. After league-wide crackdowns in the 80’s and 90’s, Nazi hooligans hit with a lifetime ban had to look for something else to do. Many of them ended up in prison, martial arts, biker gangs, crooked security firms, and straight-up crime. Others entered right-wing politics. Over the last two decades, those old-school hooligans stayed in touch and created a powerful alliance of right-wing thugs that is extremely well-connected with the above mentioned groups.

Football rivalries don’t count for much anymore, as far-right hooligans from all over Germany have joined forces under the guidance of Siegfried Borchardt. The BVB hooligan, formerly known as “SS-Siggi,” is the godfather of neo-Nazi hooliganism and even has his own Wikipedia page, in English.

The common goal is to drive progressive ultras out of Bundesliga arenas and win back the terraces. You see, any given Bundesliga club is supported by multiple ultras groups. Each ultras group has a different worldview: Some are left-leaning, most are apolitical, and others are openly racist or open to racist ideas. The Nazi hooligan alliance backs the right-leaning ultras and threatens, harasses, and assaults left-leaning ultras that bring “Refugees Welcome” or “Antifa” banners to the ground. At Alemannia Aachen, the infamous Karlsbande was able to drive left-leaning ultras out of the stadium for good.

But football isn’t even the main focus for Mazi hooligans anymore.

In 2014, the German hooligan alliance demonstrated its strength to all their “foes.” They were able to mobilize 5000 scary-looking guys in Cologne. What was officially announced as a political protest against Salafism escalated quickly, as likely was planned. It took local police hours to break-up the ensuing riots.

Ever since, the Nazi hooligan scene has linked with right-wing non-football groups. Dynamo Dresden hooligans provide cost-free security at PEGIDA rallies, for example.

The next generation of Nazi hooligans is trying to blend in. Instead of using blatantly racist slogans, they present themselves as concerned citizens that oppose Salafism, Sharia law, and ISIS. A majority of Germans will not disagree with those goals at first glance.

Bald heads and black boots have disappeared. “2.0 Nazi hooligans” have hair and wear harmless-looking clothing brands that only insiders can identify as neo-Nazi gear. And as long as Nazi hooligans don’t break any rules inside the arenas, clubs can’t hand out bans or revoke season tickets. If someone buys and wears a shirt featuring far-right ideology to the stadium, it might be despicable, but it’s 100% legal since no illegal symbols are on the shirt. Police can only do so much, because there is no law against being a dickhead. And even if they are able to charge a neo-Nazi, it’s hard to get them convicted in court.

As anti-Muslim sentiments are at an all-time high and shared by a growing number of Germans, I fear hooligan groups that fight radical Islam will find more acceptance than ever.

The DFL and its clubs must look into these groups a little harder, as they will use the Berlin attacks to attract more followers. Right now, many Germans are under the impression that our government has lost control and can’t protect us. That’s exactly the political climate that right-wing groups thrive in. They present themselves as deputy sheriffs, who will protect Germans against Muslims wherever the police are unable to do it.

Police and clubs are clueless how to deal with the far-right hooligan scene, which is well-connected via social media, has intelligent leaders, and can get 50 violent men together anywhere in Germany within hours. Authorities and clubs have to assume that their numbers have grown substantially since the refugee crisis started and will keep rising for the foreseeable future.

Roundup Ten rounds are in the books in Germany, and it’s been arguably the most exciting opener in the Bundesliga since 2007/08 when newly promoted Hoffenheim went on to be Herbstmeister.  Fast forward to today, […]

Home is where the Hertha is: A new stadium on runway 2?

London has Tottenham and Arsenal, Madrid has both Real and Atlético, while Paris has PSG and Rome has Roma and Lazio. All big capital clubs in their own stadiums filled to the brim on most […]

After the mid-week defeat to Manchester City – their first since the pre-season Super Cup in August – FC Bayern returned to Bundesliga action where next year’s Champions’ League final will be held: the Olympiastadion […]