This article first appeared on the excellent Futbolgrad site and is published here with permission of the author.

RasenBallsport (RB) Leipzig got off to their first historic Bundesliga start with a spectacular 2-2 draw on Sunday August 28 against TSG 1899 Hoffenheim. The club from Leipzig, which was created by the Red Bull GmbH in 2009, when they purchased the fifth division licence from SSV Makranstädt, has now completed its long journey to the Bundesliga.

The club, under the guidance of sporting director, Ralf Rangnick, and head coach, Ralph Hasenhüttl, are now in charge of not only establishing Leipzig in Germany’s top flight but also of creating a team that can compete with the very top of German football. To that end, Rangnick and Hasenhüttl can rely on top class facilities in Leipzig, an excellent academy system, and also a football network that reaches across the globe.

Red Bull also owns clubs in the United States (Red Bull New York) and in Austria (Red Bull Salzburg), as well as a the academy club Red Bull Brasil in Campinas Brazil, which is located 100 km outside of São Paulo.

The idea behind Red Bull Brasil is to have a club that can act both as an academy to produce players for the professional franchises in New York, Salzburg, and most importantly Leipzig, but also to identify players who may not play for another Red Bull franchise but can still be sold at a profit to one of the many professional clubs in Brazil. The complex transfer system in Brazil allows Red Bull to profit in the future, as contracts in Brazil quite often include third-party ownership clauses.

Yet, while future profits certainly play an important role at the Red Bull’s Brazilian affiliate, the primary concern for the club is to produce players who one day can become stars in Germany’s Bundesliga, as RB Leipzig is now firmly established at the top of the Red Bull football pyramid.

The first Red Bull Brasil graduate who might make a major impact in German football could be the 21-year-old Brazilian defender/defensive midfielder, Bernardo, who was signed by RB Leipzig from Red Bull Salzburg for €4 million. Bernardo has now become the third player to be transferred from Salzburg to Leipzig this summer—the other two are Naby Keïta, and Benno Schmitz.

There is a frequent exchange of players between Leipzig and Salzburg

Overall, 12 players have been moved back and forth between RB Leipzig and Red Bull Salzburg and, in almost every case, money also exchanged hands. Leipzig, for example, paid €14 million for Naby Keïta but, in reality, the transfer sums paid between the two clubs are just for appearance sake, as the money stays within the Red Bull corporation—RB Leipzig has to appear to be an independent club in order to avoid sanctions by the DFL and UEFA.

Furthermore, the fact that RB Leipzig is now at the pinnacle of the football pyramid became even more apparent this summer when the German Bundesliga club signed Bernardo after the Austrians, once again, failed to reach the group stage of the UEFA Champions League. For Bernardo, this move means that he has become the first player to go from the very bottom of the Red Bull academy system in Brazil to the very top in RB Leipzig’s squad in the German Bundesliga. 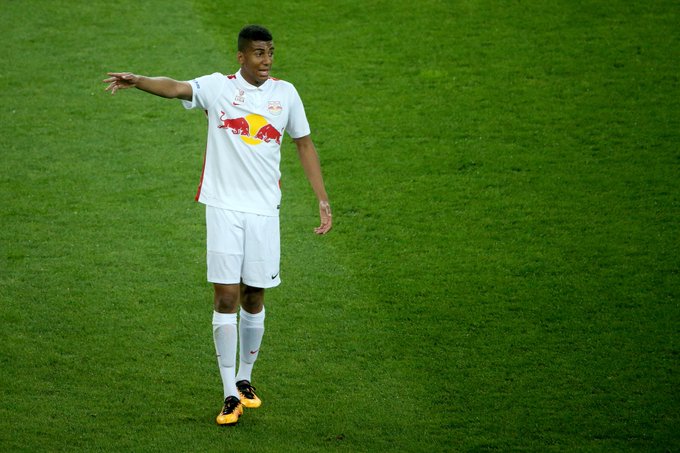 When speaking to the official homepage of RB Leipzig, Rangnick stated: “With Bernardo we signed a flexible left footed player, who can play as a centre-back, a wing-back, but also as a defensive midfielder. In the last six months he showed at Salzburg that he has potential, and he has the sort of attributes that we want to see here [in Leipzig]. His signing means that we have much more squad depth in defence.”

Indeed, Bernardo’s stats indicate that he is not only a defender, but that he can also contribute to the attack, as he has already scored for Red Bull Salzburg in the Austrian Bundesliga, and also contributed a goal in Salzburg’s failed attempt to reach the Champions League group stage.

Born in São Paulo, Bernardo joined the Red Bull Brasil academy in 2014 from his youth team Grêmio Osasco Audax Esporte Clube São Paulo, but was loaned out to the Série A club Associação Atlética Ponte Preta. Red Bull’s football scouts, however, didn’t have to travel far as the Red Bull academy in Brazil shares the Estádio Moisés Lucarelli with the Brazilian Série A club.

The problem, however, was that Bernardo rarely played, and he was therefore sent back to Red Bull Brasil to gain much-needed game time. Hence, in 2015 Bernardo was part of the Red Bull Brasil squad that finished the Group A of the 2015 Campeonato Paulista, second behind FC São Paulo—yet he only featured in three of the matches.

In Germany, Bernardo now hopes that he will leave a better impression than his father, Bernardo Fernandes da Silva, also known as Crocodile Bernardo, who had played four matches for FC Bayern München in 1991. Bernardo Sr. never could adapt to the cold realities of German football, and escaped Bavaria after just a few months—he was with the club from June 1991 to September 1991.

Bernardo Sr. is now his son’s agent, and will most certainly give him tips on how to survive in the more up-tempo Bundesliga. Furthermore, despite the financial resources of RB Leipzig, Rangnick and Hasenhüttl have always stated that they want to build a club with young and malleable players. The club’s major statement before the season was “we will not buy finished players, but want to make stars instead.” Hence, the club officials should give Bernardo all the time he needs to become an important player for Leipzig, and another Brazilian star in the Bundesliga.

Manuel Veth is the Editor in Chief of the fascinating Futbolgrad, a football website that covers all the post-Soviet states. You can also follow Manuel on Twitter at @homosovieticus

RB Leipzig 3-2 FC Porto: Home Side Capitalized on Visitors’ Strategic Mistake in the 1st Half All five goals were scored in the first half. Sergio Conceicao’s decision to press using a 4-4-2 throughout the […]

Bundesliga MD 14 Recap – Yet another twist in the plot, as Ingolstadt down RBL!

14 weeks in and the Bundesliga machine keeps churning out twists and turns that would put TV shows to shame. Where else would you have the worst team in the league – the ever so […]

When Ademola Lookman bagged a brace against Wolfsburg in May 2018 it seemed the 20-year-old forward’s future was clear. A permanent move to RB Leipzig was on the cards and a new Bundesliga star was […]