The Bundesliga finally returned for the spring season. Die Rückrunde (the season’s second half) began on Friday, when defending champions and favorites, Bayern Munich sweated out a 2-1 victory over the pesky Hamburger SV.

Thanks to the heroics of Robert Lewandowski, the Bavarians earned a Pyrrhic victory, losing star defender Jerome Boateng to a groin injury, which could have disastrous consequences for their chances of winning the league and perhaps the Champions League.

In all likelihood, this loss mean more playing time for Javi Martinez, or Mehdi Benatia (scheduled to return in early February from a muscle injury), two expensive, and more than capable options, but Boateng’s speed, intelligence and versatility will be difficult to replace. But, it is in the offense and passing game, where the Bavarians will badly miss the 27-year-old, as he is 8th in the league with over 1200 passes (and sports a 12 to 1 accuracy ratio in short passes), but is #1 in both successful longballs (126) and has a close to 2 to 1 accuracy ratio. There is a very good argument to be made that it was the injuries to David Alaba, Badstuber, Arjen Robben, Franck Ribery, with Robert Lewandowski being rushed back from a broken jaw and Javi Martinez playing after a 9 month layoff, that cost Bayern the tie vs. the brilliant Barcelona in last season’s UEFA Champions League. Hopefully, the Bundesliga gods will be a bit kinder to Bayern and Pep Guardiola will have a better ending to his 3 year tenure.

2nd place Dortmund visited 4th place Borussia Mönchengladbach and played a see-saw game in which Gladbach’s central midfield/defensive inexperience showed, as they had the edge in possession and shot 10 times to BVB’s 12, but made two crucial giveaways (credit should also go to Mats Hummels great tackle that started goal number 2, and his fellow CB Sokratis’ 60 yard sprint for the third Black and Yellow goal) that proved to be the difference. 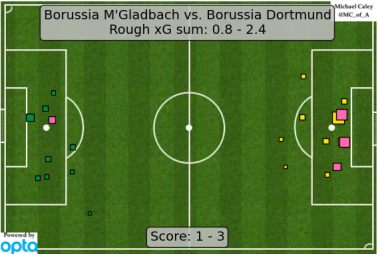 In this image, 7 Gladbach defenders are doing their darndest to make sure they are not getting near any Dortmund players in this replay of the 3rd goal, as Mkhitaryan has all kinds of time to pick up Gündogan streaking into the box to hammer the ball home. Which brings us to our Team of the Week …

Mats Hummels had 12 interceptions (including one that lead to a goal) and with his 86 passes is now over 1300 in the season, which is top 5 in the league. Let me remind everyone that he is a central defender. ESPN’s Stefan Buczko actually gave him a perfect 10/10 rating for the match and one would be hard pressed to argue with that.

Marco Reus – goal, assist and 4 key passes against his old club, and smartly taken off by Tuchel, who was concerned about a potential injury for his forward, and when you are familiar with Woodyinho’s injury history, you can’t help but understand his manager’s thinking.

Ilkay Gündogan had a trademark through ball for Reus’ goal, but more impressively, the German midfielder was unlucky not to have 2 goals, as he also hit the crossbar in perhaps his finest performance of the season. In 4 seasons for BVB (discounting 2013-14 where he was injured all year) this was his 10th goal.

Henrikh Mkhitaryan –another routine day at the office- goal, assist, man of the match. 9 assists this season in the Bundesliga and 20 total to go along with 16 goals in all competitions. With apologies to Lewandowski, Aubameyang and Douglas Costa, the Armenian is the Bundesliga’s player of the year so far.

Third place Hertha Berlin played a yawner of a goalless draw against Augsburg, despite having a whopping 65% possession, 15 points higher than their 49.7%.

Fifth place Leverkusen, despite 17 shots, needed a late equalizer by center back Ömer Toprak (also had 9 clearances) to rescue a point against struggling Hoffenheim, whose goalie Oliver Baumann needed to make 7 saves for Huub Stevens’ men.

Schalke (6th) and Wolfsburg (7th) played against Werder Bremen and Eintracht Frankfurt on Sunday, where Eintracht emerged thanks to Alexander Meier scoring a hat-trick to lift the home side to a much-needed 3-2 victory. The 33-year-old striker now has 10 of his team’s goals, for a league-leading 42% contribution.

Die Wölfe can perhaps take some solace in Andre Schürrle scoring again after 1000 minutes, but have now fallen 18 points behind BVB for second place.

Schalke’s Joel Matip opened the scoring for the home team, with their quickest goal of the season, perhaps inspired by this amazing display:

Sadly, the positives ended there, as die Knappen got soundly beaten by Werder, where Clemens Fritz scored his first goal since 2011 and the third of his Bundesliga career. The 35-year-old midfielder also set up goals by Ujah and 37-year-old Claudio Pizarro. Perhaps it was club loyalty that inspired Fritz, who is enjoying his 10th consecutive season for Bremen, or his announcement that he will retire at the end of the season, but on this day the right back turned defensive midfielder was the best player on the pitch, adding 3 interceptions and 3 clearances to his rare offensive contributions.

In the rest of the table, 8th place Mainz suffered a surprising defeat to 10th place Ingolstadt, who I predicted would fight against relegation in the spring, appear to desperately want to prove me wrong. It helped, that Lukas Hinterseer, who I named as the worst forward of the Hinrunde did not even make the squad, despite being healthy. Defender Benjamin Hübner made 5 interceptions and 5 clearances to earn a spot for Die Schanzer on our team of the week.

To nobody’s surprise, 9th place FC Cologne took an early lead vs. VfB Stuttgart – as Stuttgart lead the league, trailing a whopping 40% of the time – but gave up 3 second half goals to lose 1-3. If you’re a VfB fan I highly encourage you not to click on this excellent analysis by Dustin Ward of Statsbomb. On the other hand, if you want to see 2 players (who were both in serious contention to make my worst XI of the season)make our team of the week, by all means continue.

The much-maligned Filip Kostic used his speed to trouble the Billy Goats, as he put in an inconceivable 5 key passes, 11 crosses plus an assist with 80% passing accuracy – 20 points higher than his average – to earn a spot in our team of the week. The Serbian will be linking up with 19-year-old prodigy, Timo Werner, as they did for the first 2 goals (even if Daniel Didavi had to put in the rebound for the 1st goal). Timo Werner should make it on his contributions to 2 goals alone, but it’s actually more amazing that he won 3 aerial challenges this game, bringing his tally to 23 wins out of 108 – a whopping 21%, and scored a goal with his HEAD! The recently extended Cologne manager Peter Stöger will no doubt be kicking himself at those numbers, while the VfB faithful have to hope that such performances by Werner and Kostic were not outliers, but indications of the continued turnaround under Jürgen Kramny.

Last, but not least, minnows and long ball kings Darmstadt overcame Hannover 96’s”two-headed monster” of Szalai and Hugo Almeida (the former “assisting” the latter on a well-taken goal) with 2 poacher’s goals from their own aerial monster, Sandro Wagner. I’d be remiss if I didn’t give credit to Jan Rosenthal, who despite earning worst midfielder honors, assisted on Wagner’s second goal and had a shot brilliantly saved by Ron-Robert Zieler.

Matchday 18 Team of the Week

As always, let us know in the comments section if we missed anyone.

editor at BundesligaFanatic
Abel started out watching and playing soccer in Hungary, before falling in love with the Bundesliga in the mid -90s (thanks to Kicker and Sat1's Ran). Now, he's in the USA -- and still loving it all many years later. Abel is faithful to BVB, but also endlessly fascinated by the emergence of new teams and talents from Germany, to the point that he even started a website about it, at www.bundespremierleague.com. Otherwise, you can find him working in publishing, teaching ESL, and/or drinking craft beer - not necessarily at the same time, or in that order. Abel tweets at @VanbastenESL and @BundesPL

36 goals were scored on a captivating MD 23 and there’s just so much to talk about, I’ve decided to narrow it down to 23 talking points. Hopefully it’ll be easier to digest in bits, […]

Ingolstadt strengthened their grip on top spot with a narrow win over Red Bull Leipzig while Kaiserslautern moved into the second promotion spot with a comfortable victory over bottom-placed Aue. Elsewhere, Karlsruher picked up an […]